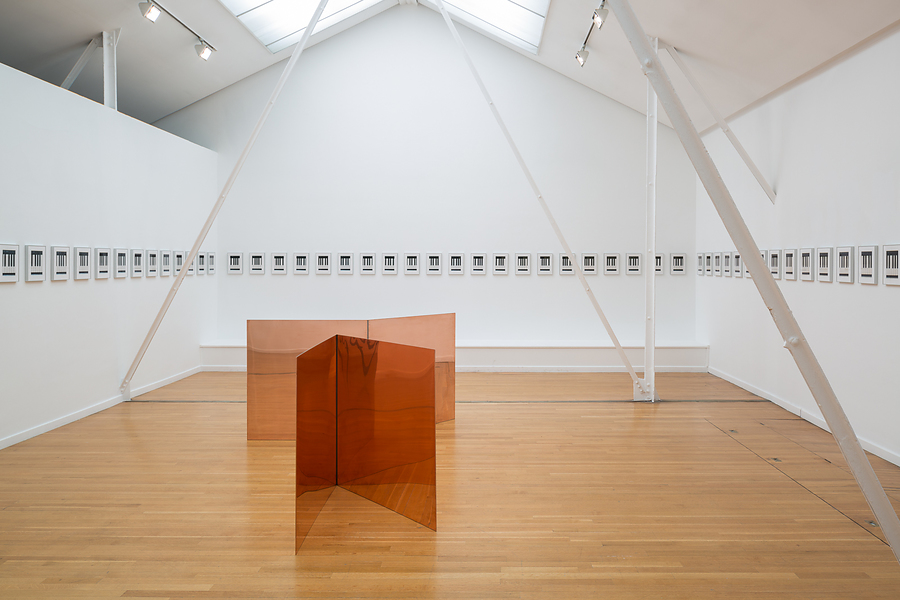 In his most recent work, Klavier, Roma, 14.11.2016, Adrian Sauer shows us how a very simple idea can be turned into a very complex aesthetic construct. The equation behind the work seems simple – 88 keys, 88 images. And in fact, it is the 88 keys of an ordinary upright piano that give the photographic series its outer structure. One key – either white or black – is at the center of each of the pictures. The distance between the camera and the keyboard has been set so that the keys appear in their actual size in the finished photos. But within the strict vertical composition, the lens captures not just the one key, but also its surroundings, such that across the series, the number of keys is unexpectedly multiplied.

Most of the 88 images encompass 11 – some 12 – keys; individual keys thus appear in differing positions 11 or 12 times in the neighboring pictures. The result is that in the photo series, the piano keyboard, about a meter-and-a-half wide, expands into a panorama more than 20 meters long, with almost 1000 keys. The series also uses barely perceptible phase shifts that convert the clear layout of the piano keyboard into a state of iridescence that defies the visual grasp. So it is precisely the clear conceptual order of the photographic-artistic orchestration that ultimately produces a complete dissolution of the visual and haptic practicalities of the keyboard.

From a distance, the series also resembles a barcode cut into 88 sections, with its information content evading any intuitive reading based on its form. Close up, however, the individual pictures are recognizable as high-precision photographic images, with the conditions under which they were created as readable as the specific objective existence of the keyboard. With the short distance between the lens and the subject, the head-on perspective that the camera position compels is most evident between the keys; towards the edges of the frames, more of their sides and, on the white keys, the beveling, becomes visible. In addition, above and beyond the keys, sections of the black varnished piano itself are visible, its curves reflecting a distorted version of the keys and the periphery.

This is the point at which the photo series enters into an explicit dialogue with the second exhibit – Kupferwinkel. That work is an angled folding diptych, completely covered in polished sheet copper. As an optical apparatus, it achieves the same effect that the photo series strives for – a constant shifting and multiplication of points of view and of objects. With that, the mirror turns the minimalistic gesture of the pictures into something performative.

With Klavier, Roma, 14.11.2106, Adrian Sauer is unmistakably plugging in to subjects that have long occupied his attention – artistic design systems (16.777.216 Farben, 2010) and epistemic classification systems (A–Z, 2012). And here, just as he has in much of his previous work, he questions and dances around the boundary between analogue and digital. The fundamental binary of classic photographic representation remains inherent in the black-and-white barcode of the keyboard. And as a control element, the piano not only evokes associations with a computer keyboard, but given the workings of the musical mechanism, it also calls to mind the credo of transfer in traditional photography. Even amidst the digital, the phantasm of the analogue does not relinquish its grip.